Westland Wessex HAS3 (cn WA241) XT257 was a pre-production version of the Naval HAS3 built by Westland at Yeovil early in 1965. As such, it never saw operational service, spending its career on development flying, such as with A&AEE Boscombe Down testing flight control systems and radio evaluation in 1966. Its flying days were over by 1980 and it was passed to the RAF as an instructional airframe (8719M) at 1 School of Technical Training at Halton and subsequently to the new 1 SoTT at Cosford early in 1995. At some stage it acquired the yellow colour scheme of a RAF HAR2 rescue variant — which it never was. Sold to a private owner in West Sussex in 1998, XT257 arrived by road in January 2005 for display at the Bournemouth Aviation Museum.

Helicopters were used by the military in large numbers in the early 1950’s and one way for Britain to expand its fleet quickly was to build American designs under license. So Westland Helicopters of Yeovil built the Sikorsky S-51 and S-55 in the 1950’s as the Dragonfly and Whirlwind, with Westlands making a number of improvements. Westland built the Sikorsky S-58 as the Wessex and this was used in large numbers by all the services.

The Wessex was ordered by the Royal Navy for use in the anti-submarine role, being based on a carrier or the stern of a destroyer. The first Yeovil built Wessex flew in June 1958 and deliveries to the Royal Navy commenced in April 1960, entering full service in July 1961. A total of eleven squadrons operated the HAS1, which had improved radar and extra engine power, plus the ability to carry wire-guided missiles. The HAS3 version which entered service in January 1967, could be distinguished from the HAS1 by the radar hump on top of the fuselage. When the HAS3 entered service a number of HAS1’s were available for commando duties, being used operationally in Borneo. The HAS3 remained in service until December 1982 when it was replaced by the Sea King, which was Westlands development of the Sikorsky S-61.

The Wessex HC2 was ordered by the RAF for troop transport duties. The HC2 entered service at Odiham in February 1964 and later saw action in Aden and the Far East. A number were later converted for Search and Rescue duties to replace the Whirlwind. It is this colour scheme that is currently worn by XT257. A similar version for the Royal Navy’s Commando Forces was the HU5, entering service in October 1964. Six squadrons used the HU5 until 1987 when they were replaced by a Commando version of the Sea King. Wessex operations had begun to wind down by the early 1980’s, but it was called back into action during the Falklands War of 1982, providing a vital role in ferrying troops from ship to shore. Two Wessex HCC4’s were used by the Queen’s Flight. Bristow Helicopters used civilian Wessex for North Sea oil exploration work and the HAS1 was also purchased by the Royal Australian Navy. In all a total of 382 Wessex were built by Westland Helicopters. Locally Wessex were based at RNAS Portland and could often be seen flying along the Dorset coast off Bournemouth. 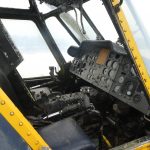 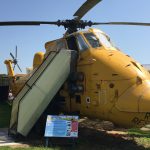