Westland Wasp XT431 first flew on 24th May 1965 and delivered to the Royal Navy in July 1965. Initially stored, it was issued to 829 Sqd at Portland in October 1966 where it was used to train crews prior to being posted to a frigate. XT431 was based on HMS Scylla from February 1972, transferring to HMS Jupiter in June 1976. It returned to RNAS Portland in December 1979 where it was used by 703 Sqd — the Wasp Flying Training Squadron. From March 1980 until September 1981 it was based on HMS Rothesay, again in training role.

During its service it had mixed fortunes, suffering a hard landing on Chesil Beach after losing power in November 1967, losing part of a tail rotor blade and performing an emergency landing near Weymouth in April 1968, running over a marshaller’s foot while under tow in July 1970 and being struck by another Wasp in March 1971.

With the arrival of the newer Lynx helicopter, XT431 was declared surplus to requirements in October 1981 and sold to the British Rotorcraft Museum at Weston-super-Mare. It later passed to Crawley Technical College in November 2003 as a training airframe and then moved to the Gatwick Aviation Museum in September 2008. The Museum sold a number of their aircraft in 2013 with XT431 arriving at the Bournemouth Aviation Museum in December 2013.

The Wasp was a small anti-submarine helicopter developed by Westland Helicopters. Powered by a Rolls-Royce Nimbus turbine engine, the Wasp had a range of 300 miles at a cruising speed of 110 mph. Standard armourment was two Mk 44 homing torpedoes carried under the fuselage or two Nord AS,12 guided missiles mounted on the side of the fuselage. Normal operational crew was two, although there was space for a further three passengers in the cabin.

Entering service in 1963, Wasps were built at the Hayes Factory of Westland Helicopters. They were carried by the Royal Navy Leander and Rothesay class frigates which, on detecting a submarine, would dispatch their Wasp to drop its torpedoes. Wasps were also land based at RNAS Portland and frequently flew along the coast over Bournemouth with their distinctive high pitched engine sound. Wasps saw action in the Falklands Campaign of 1982, disabling the submarine Santa Fe. Taken out of service in the spring of 1988, the Wasp was replaced in Royal Navy service by the Westland Lynx. Ninety-six Wasps were built for the Royal Navy, with others operated by Brazil, Indonesia, Netherlands, New Zealand and South Africa. 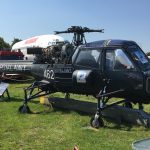