Vulcan B.2MRR XH537 was built in 1959 and delivered to the RAF in August. It was set aside as a trials aircraft for the American Skybolt missile and fitted with two dummy Skybolts under its wings. When the Skybolt programme was cancelled, XH537 then served with 230 Operational Conversion Unit (OCU) at RAF Finningley. It saw operational service from 1978 with 27 Sqd. at Scampton as a MRR version undertaking maritime reconnaissance.

Withdrawn from service by early 1982 it was allocated for ground instruction use at Abingdon in March. It survived until May 1991 when the aircraft was broken up with the nose section being saved. This was stored at Camberley and Ottershaw before moving north to Bruntingthorpe where XH537 was put on display. The owner moved the nose to Bournemouth in October 1991, with ownership passing to the Bournemouth Aviation Museum in March 2003.

The Vulcan was one of the three V-Bombers operated by the RAF during the 1950/60/70’s, the others being the Valiant and Victor. It was designed by Roy Chadwick who had also designed the Lancaster and built at Woodford near Manchester. The new bomber was required to carry a large bomb load long distances essentially into Russia during the Cold War. The revolutionary delta wing shape was chosen to give a high subsonic speed at high altitude, a good bomb carrying capability and a long range. The unarmed bomber carried a crew of five and its bomb bay could hold twenty-one 1,000 lb bombs.

The Vulcan first flew in August 1952, by which time the RAF had already placed its first order.
The Vulcan B1 entered service with the RAF in May 1956. These production aircraft were fitted with 12,000lb thrust Bristol Siddeley Olympus 102 engines, giving a speed of 625 mph and a range of 3,450 miles. After completion of forty-five aircraft, production switched to the B2 version which had a larger wing span and was powered by 17,000lb thrust Olympus 201’s. Nuclear bombs were carried and range was increased to 4,600 miles. The B2 entered operational service in October 1960 with the intention to fit the American Skybolt stand-off missile; however the Americans cancelled the programme in December 1962. So the Blue Steel stand-off bomb was developed by Avro for the Vulcan, entering service in 1963 with bombers based at RAF Scampton. Now designated B2A, this version had a more powerful Olympus fitted to cope with the extra weight, but had a reduced range. Eleven RAF squadrons operated the Vulcan B2/2A.

In July 1969 the Royal Navy took over Britain’s nuclear deterrent with its fleet of Polaris equipped submarines. This saw the RAF Vulcans switch to a tactical bombing role, which was carried out at low level and resulted in the bombers receiving full camouflage. The Tornado replaced the Vulcan in this role, but did not enter service until early in 1982. However, just as the RAF began withdrawing their Vulcan, it found it needed them when the Falklands War erupted in April 1982. So after twenty-six years of service, without seeing action, the Vulcans swan song was finally to go to war. Operating from Ascension Islands in the mid-Atlantic, Vulcans set out in May to bomb Port Stanley – 4,000 miles away. This meant flying for fifteen hours and being refuelled numerous times by Victor tankers. Although the main runway at Port Stanley was hit, the damage was not as great as had been hoped. The Vulcan was finally withdrawn from operational service in March 1984, although the RAF maintained one in aircraft in airworthy condition for display purposes until September 1994. 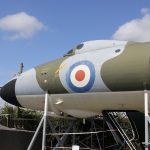 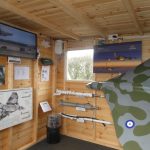