Vickers Viscount 806 (cn 263) G-OPAS was built by Vickers-Armstrongs at Weybridge early in 1958 and delivered to British European Airways (BEA) at Heathrow on 26 March as G-AOYN. It was part of a large fleet of Viscounts used by the airline on its European services. At the end of 1971 it was bought by Cambrian Airways and operated from Cardiff. On 1 April 1974 Cambrian became part of the new British Airways, with G-AOYN continuing in service until the spring of 1980. It was then purchased by British Air Ferries (BAF) in February 1981 and based at Southend. During its time with the airline it was frequently chartered to other airlines on short term leases. Re-organisation saw BAF renamed British World Airlines in April 1993 and G-AOYN continued in service on freight duties.

The airline obtained a contract from Parcelforce following which the aircraft was repainted in a distinctive Parcelforce red and reregistered G-OPAS in October 1994. The aircraft was taken out of service in the summer of 1996, being broken up early the next year. The nose section was saved by the Duxford Aviation Society and initially displayed at Duxford. In December 2006 an agreement was made with the society and the nose section moved to the Bournemouth Aviation Museum on permanent loan.

The Viscount was a successful British airliner of the 1950’s designed by Vickers-Armstrongs. The prototype flew on 16 July 1948 with Rolls-Royce Dart turbo-props which were a huge improvement over previous piston engined aircraft. They were fitted in slim, low drag nacelles, provided a quiet and vibration free flight for passengers. The Viscount entered regular service with BEA in April 1953, with 47/53 seats. The passengers liked the new airliner due to its large windows and quietness throughout the cabin.

The early Viscounts were bought by a number of European airlines (Air France, Alitalia, and Lufthansa) as well as in Australia. However, the breakthrough came when a version developed for the American market was sold to Trans-Canada Air Lines (Nov 52) and then Capital Airlines of Washington (Jun 54). Over 100 were ordered by the two airlines — something unknown for a British airliner at the time. This success led to other worldwide orders ranging from Norway to Nicaragua; Brazil to the Philippines.

Vickers-Armstrongs quickly realised that a second factory would be needed to cope with all the orders and this was established at Bournemouth with their first Viscount for BEA flying in December 1953. Total production (including prototypes) amounted to 445, of which 279 had been built at Bournemouth.

The early Viscount 700s were supplemented by the larger Viscount 800 which seated 67 passengers. Large numbers were used by BEA, with other sales made to Australia, Pakistan, Japan and the USA. Production continued until April 1964 when the final Viscount was delivered to China. The Viscount remained in worldwide use in the 70’s and 80’s but was gradually replaced by newer aircraft.
A number in the USA were fitted out as VIP transports and many were converted as freighters. The final ones were withdrawn from service in South Africa in 2007. Viscounts were operated from Bournemouth with a large number of airlines such as BEA, Cambrian, Dan-Air & British United. 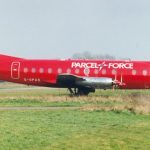 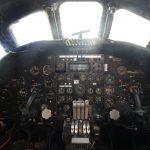