The Vickers Vanguard was a short/medium-range turbo-prop airliner introduced in 1959 and built by Vickers-Armstrong as a successor to its very successful Viscount design. Bournemouth Aviation Museum is fortunate to have this Vanguard simulator that was used to train the pilots on this aircraft. The simulator is fully equipped with all the controls and will give you a great idea of what is was like to fly this aircraft. Additionally, we have installed a TV which shows a video of the final Vanguard / Merchantman flight from Belfast to Coventry in 1996.

The aircraft was designed to a British European Airways (BEA) requirement for a 100-seat aircraft with a range of 1000 miles to replace its Viscounts. The original designs were then modified when Trans Canada Airlines (TCA) expressed its interest in the aircraft and resulted in the Type 950 prototype that fulfilled both airline requirements. However, there were to be three production versions namely the Type 951/952/953.

In July 1956 BEA initially placed an order for twenty Type 951 which seated 127 passengers. However, TCA found that the Type 951 could not meet their freight payload requirements with a full passenger load on their longer-range routes. They requested a modified variant (Type 952) with increased maximum weight from 135,000 lb to 141,000 lb, and a maximum seating capacity of 139 passengers. It also required more powerful 5,545 bhp Tyne 512 engines, rather than the 4,985 bhp Tyne 506 engines of the BEA Type 951. In January 1957 for TCA placed an order for twenty three Type 952 aircraft. The prototype Type 950 G-AOYW first flew on 20 January 1959 on a short flight from the factory at Weybridge to Wisley three miles away where the flight testing was then carried out.

The Vanguard entered service with BEA in late 1960 and took over many of their busier European and UK trunk routes. However, BEA had realised that they could benefit from some of the features of the TCA Type 952 and requested a new variant, the Type 953 specifically for BEA. The Type 953 had an increased maximum weight to 141,000 lb and was typically configured with 135 seats even though it still retained the lower powered Rolls-Royce Tyne 506 engines. Subsequently, the BEA order for twenty aircraft was amended to six Type 951 and fourteen Type 953.The aircraft remained in service with BEA and later British Airways until the last BA passenger flight on 16 June 1974. The Vanguard had shown great potential for becoming a cargo-only aircraft and in 1969 BEA converted nine aircraft to a cargo version called “the Merchantman” which continued in service with BA until late 1979. Air Bridge Carriers Limited purchased several of the Merchantmen from BEA and operated them through until 1992 when it changed its business name to Hunting Cargo Airlines.

The Vanguard entered service with TCA (later to become Air Canada) in February 1961 and served with them until 1972. In 1966, Air Canada refitted one of the aircraft for pure cargo work, in which role it could carry 42,000 lb (19,050 kg) of freight. Known by the airline as the “Cargoliner,” it was the only such conversion and survived to be the last Canadian Vanguard to be retired in December 1972.

In total only forty-four aircraft were produced, with one prototype, twenty for BEA and twenty-three for TCA. Unfortunately, the aircraft were being built at the time of the arrival of jet aircraft and many airlines opted to order jets such as the Boeing 737, Caravelle and others, instead of the Vanguard. 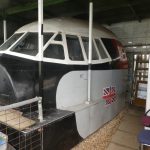 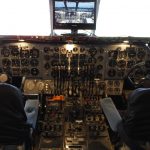 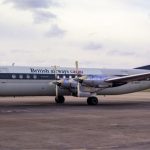