Sepecat Jaguar GR1 (cn S60) XX763 was built by BAC at Warton and first flew in May 1975. It was displayed at the Paris Show in June before being delivered to the RAF. It first entered service with 226 Operational Conversion Unit at Lossiemouth for the continuation training of new Jaguar pilots. It transferred to 54 Squadron at Coltishall January 1980 for a short spell before returning to 226 OCU. XX763 was withdrawn from active service by April 1985 and stored at RAF Shawbury.

XX763 was then issued to No 4 School of Technical Training at St Athan as 9009M for ground training. Surplus to RAF requirement by the end of 2005 the Jaguar was sold to Transworld Aviation Trading of West Sussex early in 2007. After a period of storage the aircraft was kindly loaned to the Bournemouth Aviation Museum, arriving in September 2009. It has been restored to the all over camouflage scheme it wore in its latter days with 226 OCU.

The Jaguar was developed jointly by Great Britain and France who were looking for an advanced trainer. Sepecat was the company formed by BAC and Breguet to develop the trainer. However, a change of requirement saw both countries develop the Jaguar as a tactical strike aircraft, each country receiving 200 aircraft which included a number of trainers. The French prototype flew in September 1968 and the British one in October 1969. The Jaguar GR1 entered RAF service in March 1974 and took over the ground attack role from the RAF Phantoms. Eventually it served with three squadrons at Coltishall and five in RAF Germany. Those in Germany were replaced by Tornadoes from June 1984.

The home based squadrons saw action in the First Gulf War of 1991 where the Jaguars operated at medium levels instead of their usual low level attacks. Later they saw action in the Balkans and Iraq. Due to their operational success it was decided to upgrade the aircraft to GR3’s over the next few years, giving them day and night capability. Having spent the money they were then withdrawn from service early to save money under Defence Cuts! Instead of ending up on the scrapheap, many of the Jaguars continued in use with the RAF as instructional airframes, their flying role taken over by Typhoons. In all the RAF received 165 Jaguar GR1’s and forty of the T2 trainer version.

BAC and Sepecat developed the Jaguar International in 1976 which resulted in export sales to Ecuador, Nigeria and Oman. Only Oman was to make any real use of them. More important was the sale of forty to India in 1978 with production then being undertaken by Hindustan Aeronautics in India. Low rate production continued until 2012 — five years after the RAF withdrew them from active service. The French Air Force received 160 Jaguar A’s (Attaque) and 40 Jaguar E’s (Entraineur), being fitted with French guns and missiles. They equipped six squadrons, first seeing action in Mauritania in December 1977. Various conflicts in other parts of Africa — including Chad and the Central African Republic — saw French aircraft based there until 1991. The French aircraft also took part in the First Gulf War and the Balkans. The Jaguar continued in French service until July 2005, when their role was taken over by Mirage 2000s. 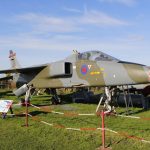