North American Harvard 11B KF388 represents a typical Harvard, being built from a collection of parts from various sources, mainly from a Harvard dump at Camberley in the 1960’s. As such it cannot be attributed to any one aircraft. Most of the fuselage is ex RAF, the fin ex Royal Navy, one wing ex Italian AF, with another part marked as a US Navy SNJ. The fuselage appears to be that of KF388 and so the aircraft has been restored as such.

Built as a Harvard 11B by Noorduyn Aviation it was delivered to the RAF in late 1944 initially serving with 7 Flying Training School (FTS) at Peterborough, It ended its days in the mid-1950s with 6 FTS at Ternhill, eventually being sold for scrap in February 1957. It was one of a number that ended its day in the Camberley scrapyard. A Bournemouth aviation enthusiast collected a large number of Harvard parts from Camberley and rebuilt a complete aircraft in the 1970’s. He then started work on a second, but died before the project had reached very far. After years of neglect the parts were donated to the Museum in 2000 with volunteers completing the work over a number of years.

One of the most well-known training aircraft, the Texan Harvard was developed by North American. The sturdy, all metal Texan had a large cockpit which gave an excellent view for instructor and trainee and gave it a fighter like performance.  With the threat of war looming in Europe, the RAF was on the lookout for new aircraft that could supplement the hard pressed home aircraft industry. In June 1938 an order was placed for 200 Texans, which were known as Harvards in RAF service. The first aircraft was delivered to 3 FTS at Grantham type prior to the outbreak of war. Over 5,000 Harvards were eventually delivered to the RAF.

Following the outbreak of war in Europe, the Americans greatly increased their order for Texans.
The Commonwealth Air Training Scheme resulted in many more pilots being trained in Canada & Rhodesia. Of the 15,500 built up to 1945 many thousand remained in service with the USAF in 1948. They instigated a major rebuilding programme to update about 2,000 of the trainers as T-6G Texans with many delivered to ‘US friendly’ countries. These rebuilds were undertaken both by North American and Noorduyn. The RAF had over 1,000 Harvards still in service at the end of the war with the final ones remaining until March 1955, when they were replaced by Vampire Trainer jets. Many USAF, RAF and RCAF aircraft were to spend more years flying with air forces in all parts of the world. 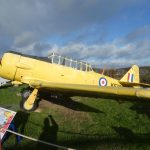 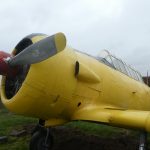