Hawker Hunter F6 XG160 (cn S4/U/41H/3393) was built by Armstrong Whitworth Aircraft at Coventry and delivered to the RAF in August 1956. Initially it served with 43 Squadron at Leuchars before being transferred south to 111 Squadron at North Weald in 1958. At the time they were famous for being the RAFs premier aerobatic team “the Black Arrows” and specialised in large formation displays.

By the spring of 1966 XG160 was serving with 229 Operational Conversion Unit (OCU days with No 1 Tactical Weapons Unit (TWU) at Brawdy until June 1982. It was then transferred to Scampton as an instructional aircraft with the Trade Management Training School (TMTS) in September 1984. In December 1994 XG160 was sold to Jet Heritage at Bournemouth, where it was allocated civil registration G-BWAF in February 1995 in anticipation of being restored to fly. However, this did not happen and the Hunter passed into the hands of the Bournemouth Aviation Museum.

The Hunter was considered the most successful jet fighter built in Great Britain. Developed by Hawker Aircraft as a day fighter to replace the RAF’s Meteors and Venoms, it was powered by the Rolls-Royce Avon of 7,500 lbs thrust and armed with four 30mm guns. At the same time a version with the Armstrong Siddeley Sapphire engine was also built. First flown In July 1951 both versions of the Hunter was ordered into priority production for the RAF – this was the time of the Cold and Korean Wars.

The Hunter F1 & 2 entered service in July 1954 but soon showed that they were short on range. The improved F4 & 5 entered service in June 1955 having increased fuel capacity and underwing stores. The definitive F6 followed, powered by a 10,000lb thrust Avon and able to carry a variety of underwing bombs and rockets. It entered service in May 1955, serving with a large number of RAF squadrons both at home and RAF Germany. Pilots described the Hunter as real joy to fly. To replace Venoms in the ground attack role the Hunter FGA9 was developed, with large numbers converted from existing F6s. This new version served in RAF Germany as well as the Middle East and Far East until 1968.

The Hunter proved a success in the export market and was ordered by air forces around the world, including Sweden, Belgium, Holland, India & Switzerland. When the RAF’s Hunters were replaced by Lightnings the surplus aircraft were repurchased by Hawker and refurbished for export customers. The final Hunters to remain in front line service were those of the Indian Air Force who finally withdrew them in 2004. Overall nearly 2,000 Hunters were built.

On 7 September 1953 Neville Duke in a Hunter broke the world speed record attaining 727.63 mph over the Sussex Coast. At the September 1958 Farnborough Air Show the RAF’s 111 Squadron Aerobatic Team looped a formation of twenty-two Hunters – a record that has never been beaten and XG160 Was one of the aircraft in this formation. 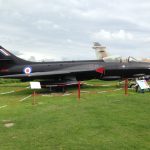