Handley Page Herald Srs. 401 (cn 175) G-BEYF was built by Handley Page at Radlett and first flew on 3rd January 1964. It was one of eight ordered by the Royal Malaysian Air Force being delivered with serial FM-1022 on 17 January. The fleet were based with 4 Sqd at Kuala Lumpur and fitted to carry 50 troops, 24 stretchers or 10,000 lb of cargo. The Heralds served the Malaysians well, but there was a need for greater capacity and in 1976 it was replaced by the C-130 Hercules. The Heralds were sold to British Air Ferries and FM-1022 reregistered as G-BEYF entering service from Southend in October 1977. Early in 1979 a number of BAFs Heralds were transferred to BIA, including G-BEYF, continuing to operate from Southend. BIA and Air Anglia merged to form Air UK, having a combined fleet of 20 Heralds.

After a number of years’ service, G-BEYF was sold to Elan-Air in April 1986 and used in an all-cargo role until in August 1988 when it was sold to join Channel Express at Bournemouth. It operated their services to the Channel Islands and Royal Mail flights to Liverpool. At one time Channel Express had a fleet of fourteen Heralds, but were eventually replaced by Electras and F27 Friendship freighters.

G-BEYF operated the world’s final Herald flight on 9 April 1999 — the nightly Royal Mail service from Bournemouth to Liverpool and return. On 26 May it was towed to the original Bournemouth Aviation Museum for preservation where it stayed until December 2007 when the Museum was forced to close. As there was no place for the full-size Herald it was largely scrapped, but fortunately the nose section was saved and transferred to the new Museum site in 2015. Work on the Herald is now underway to restore the interior and to repaint the exterior in the colours of Channel Express.

The original HPR.3 Herald was powered by four Alvis Leonides Major piston engines, with the prototype flying in August 1955. By the time the second prototype flew a year later Handley Page realised their new airliner needed to be powered by turbo-props, as was the rival Fokker F27 Friendship and it was re-engined with two Rolls-Royce Dart turbo-props, flying again in March 1958. In August it suffered an uncontrollable engine fire, being destroyed in the subsequent crash landing.

The second prototype flew in December and Handley Page announced that it was building a batch of ten Heralds. To aid the company the Ministry of Supply ordered three in June 1959 for service with BEA. These were Srs100 aircraft, carrying 44 passengers. The first order from an airline came in September 1960 when Jersey Airlines ordered ‘six of the Srs200 aircraft, carrying 48/50 passengers. The first of the batch of ten (G-APWA) flew in October 1959 and spent most of its life as demonstrator. The Herald entered service with Jersey Airlines in May 1961on the route from Jersey to Bournemouth using leased aircraft until their own were available in May 1962.

Faced with competition from the F27 Friendship, Herald sales were slow, usually being ordered in twos or three from countries ranging from Canada, Italy, Brazil, and Israel. Production ended in the summer of 1968 with only 50 aircraft completed. Over the years there were many second-hand sales seeing operations in other parts of the world, but slowly the Herald disappeared as many airlines replaced their Heralds with F27 Friendships. The final operator was Channel Express of Bournemouth with the final service from Liverpool to Bournemouth taking place in April 1999. This resulted in Bournemouth Airport witnessing the first and last ever service of the Herald. 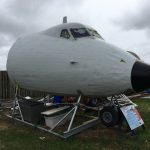 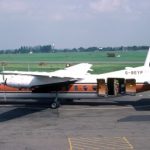 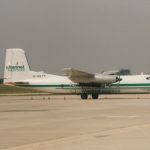