As you would expect for an aircraft built in 1984 and flying for 22 years, the Jetstream had a number of owners over the years. It was delivered new (cn 640) to Eastern Metro Express as N410MX on 27 October 1984. Repossessed by BAe on 19 January 1991 it was then re-registered G-BUFM 08 April 1992. Transferred to Lakeside Aviation as G-LAKH on 07 August 1992 and then to Air Kilroe as G-?OKA by 01 July 1996. It was transferred to Love Air as G-LOVA on 28May 1998 and then finally to Platinum Air Charter as G-PLAH on 21 Nov 1999. It was withdrawn from use in November 2006, the registration cancelled on 22 January 2008 and the aircraft scrapped. However, the nose of the aircraft was preserved and eventually placed at the Boscombe Down Aviation Collection. It was finally transferred to the Bournemouth Aviation Museum in May 2020.

The Jetstream family of aircraft originates from designs by the British aircraft manufacturer Handley Page in 1965. Although the company was better known for building much larger aircraft such as the Victor bomber, it decided to develop a small regional turboprop aircraft to fill what it saw as an increasing market for this type of aircraft particularly in the US. The designs were based on providing an aircraft with 12-18 seat capacity that had better range-payload, higher speed and greater comfort than its main competitors, the Beechcraft King Air, Aero/Turbo Commander and Swearingen Merlin.

The aircraft was a low-wing, high-tail monoplane with conventional layout, but considerable attention was paid to streamlining in order to improve performance which led to the distinctive long nose profile. Aircraft final assembly took place at the company’s Radlett aerodrome north of London, but large parts of the structure were subcontracted. The wings were built by Scottish Aviation at Prestwick, Scotland and the tail section by Northwest Industries of Edmonton, Alberta, Canada.

The original design used Turbomeca Astazou XIV engines of 840 hp and flew on 18 August 1967 as the Jetstream 1. However, the testing program proved the engines to be a weak point as they were underpowered and temperamental. Testing was eventually moved to the Turboméca factory airfield in the south of France, to allow faster turnaround with engine work and by taking advantage of the better weather.

The first production model Jetstream 1 flew on 6 December 1968 and over the next year a total of 36 aircraft would be delivered. However, by this point Handley Page decided to replace the original engines with larger 965 hp Astazou XVI and they also renamed the aircraft as the Jetstream 2. Deliveries started in late 1969, but unfortunately the engine problems and late deliveries had resulted in development costs spiralling to over £13 million, far more than the original £3 million projections. Only three Jetstream 2s would be completed before Handley Page went bankrupt, and the production line was eventually shut down in 1970.

However, that was not the end of the story. There was enough interest in the aircraft design and Scottish Aviation (who manufactured the wings) and other investors formed a company called “Jetstream Aircraft” to continue production of the aircraft and they made a further ten Jetstream 1s. Scottish Aviation also continued production of the Jetstream 2, although referring to it as the Jetstream 200. In February 1972, 26 Jetstream 201s were ordered by the Royal Air Force, which used them as multi-engine trainers as the Jetstream T.1. Fourteen of these were modified as observer trainers for the Royal Navy, receiving the designation Jetstream T2

In 1978 Scottish Aviation was nationalised along with other British companies into British Aerospace (later BAE Systems). BAe decided the design was worth further development and started work on a “Mark 3” Jetstream. The Jetstream 31 is fitted with two Honeywell TPE331 engines with Dowty 106in (2.69m) reversing four-bladed metal propellers which offered more power at 1,020 shp and longer overhaul intervals over the original Turbomeca Astazou engines. The modular construction of the engine allowed for easy and economical maintenance. These improvements allowed the aircraft to be offered in an 18-seat option (six rows, 2+1), with an offset aisle. It also improved the ability to operate at maximum load from a greater range of airfields, particularly in the continental United States and Australia.

The result was the Jetstream 31, which first flew on 28 March 1980, being certificated in the UK on 29 June 1982. The new version proved to be very popular and several hundred 31s were built during the 1980s. In 1985, a further engine upgrade was planned, which flew in 1988 as the Jetstream Super 31, also known as the Jetstream 32. Production continued until 1993, by which time 386 Jetstream 31/32s had been produced. Four Jetstream 31s were ordered for the Royal Navy in 1985 as radar observer trainers, the Jetstream T.3, but were later used for VIP transport.

In 1993, British Aerospace adopted the Jetstream name as its brand name for all twin turboprop aircraft. As well as the Jetstream 31 and Jetstream 32, it also built the related Jetstream 41 and the unrelated, but co-branded BAe ATP/Jetstream 61. The Jetstream 61 name was never used in service, and retained its “ATP” marketing name.

A Jetstream operated by Apollo Airways, a commuter airline based at the Santa Barbara Airport in California, appeared in the 1979 film “Moonraker” starring Roger Moore where British secret agent James Bond (007) is thrown out of the aircraft while it is in flight. 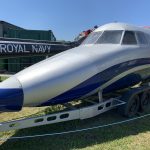