Colomban MC-12 Cri-Cri G-BOUT / N120JN (cn 12-0135) was built in 1983-86 by James Nelson of Wisconsin from plans supplied by Colomban. It was registered N120JN on 18 January 1985 and placed on the American Experimental Aircraft Category. It appears little flying was undertaken and the Cri-Cri was shipped to England in June 1988 for a Potters Bar owner who registered it as G-BOUT. However, the registration does not seem to have been applied as it appeared at the 1989 Popular Flying Association Rally still as N120JN. After that date the Cri-Cri’s history remains unknown, so it is not certain if it flew again.

N120N resurfaced in the spring of 2011 when it placed up a tree by the entrance of a builder’s yard near Dorchester — the owner deciding it could act as a Gate Guard to his yard. He had discovered that it was about to be scrapped and luckily decided that it was worth saving. In the spring of 2016 it was bought by a new owner and moved to Devon for “restoration to fly”! It later moved to Sussex but the owner decided that restoration was too much of a task and in April 2019 put N120JN for sale. It failed to reach its reserve price, so the Bournemouth Aviation Museum stepped in to purchase it. The Cri-Cri arrived at the Museum in May 2019 in pieces and has now been lovingly restored by two of the Museum volunteers. It is displayed with its ‘unused’ British registration.

The Colomban Cri-Cri is the smallest twin-engined manned aircraft in the world, designed in the early 1970s by French aeronautical engineer Michael Colomban. The name Cri-Cri comes from the nickname of Christine, one of Colomban’s daughters. Cri-cri’ ‘or ‘cricri’ is also the French term for the sound of a cricket or a cicada, or an informal name for the insects themselves, but it is unclear if this double meaning was intended by Colomban himself.

The Cri-Cri features a cantilever low-wing, a single-seat enclosed cockpit under a bubble canopy, fixed tricycle landing gear and twin engines mounted on pylons to the nose of the aircraft in tractor configuration. The aircraft is made from aluminium sheet glued to Klegecell foam. Despite its small size the Cri-Cri is acrobatic and the pilot is provided with a cockpit canopy! The downside is that pilots find the fuel tank situated between their legs!

The early Cri-Cri aircraft were powered by two 15 hp twin stroke engines as standard, but the later MC-15 is fitted with 18 hp engines. These show their improvement when undertaking aerobatics. As a ‘fun’ aircraft the Cri-Cri had a speed of 185 kmh but limited range. Colomban supplies plans to would be constructors, with an estimated cost of $15,000/17,500 to complete. As well as home interest, Canada, Great Britain and the United States proved popular for Cri-Cri constructors. 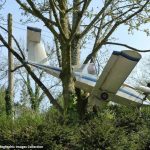 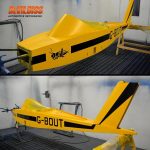