The Grumman American AA-1 series is based on a light, two-seater aircraft with good handling characteristics. It includes the original American Aviation AA-1 Yankee Clipper and AA-1A Trainer, the Grumman American AA-1B Trainer and TR-2, plus the Gulfstream American AA-1C Lynx and T-Cat. All the models accommodate two people in side-by-side seating configuration under a sliding canopy.

G-BBFC was originally built in 1973 by Grumman Aviation at Savannah, Georgia with a construction number 0245. It was registered to a V. Bernard and the Bournemouth Flying Club in 1974, hence the personalised registration. Unfortunately, its flying days came to an abrupt end on 9th June 1996 when it was damaged beyond repair during a landing. The aircraft was on a flight from Enstone, Oxfordshire to Lands-End airfield, when the weather deteriorated en-route. The pilot attempted to divert to a small airfield at Perranporth, Cornwall, but during the final approach there was a strong wind shift and the aircraft crashed on landing. Fortunately, both the pilot and passenger survived.

As a result of the accident, the aircraft was classified as a write-off and the registration cancelled with the CAA in October 1996. The aircraft you see to-day at Bournemouth Aviation Museum is a re-built version using the fuselage from G-BBFC, the wings from AA-1B G-BERY and other internal parts from AA-5 G-BAVS, all of which were donated to the Museum in 2019. The aircraft was then lovingly re-built by one of the volunteers at the Museum and it will eventually be re-painted in the original yellow colour scheme you see in the picture at the bottom of the page.

The Yankee was originally designed in 1962 by Jim Bede in the US to be sold as a kit-built aircraft with folding wings. The BD-1 first flew on July 11th 1963, but it never entered production because the FAA was hesitant to certify a light aircraft with folding wings! As a result of these certification difficulties and internal disagreements with his business partners, Bede left the company which was then renamed American Aviation.

The initial design was then significantly revised and the idea of a folding wing design abandoned for a more conventional design. Other changes included adding extended wing tips, measures to improve longitudinal stability and stall strips to improve it’s handling during a stall. The company designated the redesigned aircraft the AA-1 Yankee Clipper, which was then certified by the FAA in 1967 and the first production flight took place on May 30th 1968.

The Grumman light aircraft line was then acquired by Gulfstream Aerospace in 1977 who renamed it the Gulfstream American Light Aircraft division based at Savannah, Georgia. The aircraft was re-designed resulting in the AA-1C, which was marketed in two versions differentiated by the avionics fitted and the external trim package. The Lynx was targeted at private owners while the T-Cat was the flying school trainer.

The AA-1C received a new larger horizontal tail and other significant improvements, including a 115 hp Lycoming high-compression engine.  A total of 211 AA-1Cs were produced in 1977 and 1978 when production of the type finally ended. Overall, it was a popular light aircraft and a total of 1820 AA-1 family aircraft were built from 1969-1978. Examples of the AA-1 series have been exported to many countries around the world with many still flying to-day. 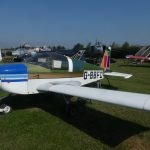 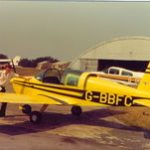