The Chubb Spearhead Rapid Intervention Vehicle (RIV) (SHX 352R) was built by Chubb Fire in 1975 as one of fifteen introduced for the British Airports Authority (BM) which at the time controlled seven airfields across the UK. This batch of vehicles were the first UK deployment of this type of vehicle and BAA had high hopes that the Spearhead and the “export model” Chubb Pursuer would set standards in a world market. From the summer of 1976 each of the seven airports had two Spearheads in service with a 15th reserve vehicle shared between Heathrow & Gatwick.

Our particular vehicle was delivered to Stansted Airport in 1976, which, along with a second vehicle joined the fire engines already in use with the Airport Fire Service. It remained in service until 1991 when, after a period of storage, it was donated to the Brooklands Museum in 1994. In 2016 it was acquired by Bournemouth Aviation Museum.

The Chubb Spearhead was designed in the early 1970s as a small, high powered, high speed airfield crash and rescue appliance to support the fire section. It was designed to have better mobility in terms of cornering, acceleration and speed than a large tender and could reach any incident quicker than the normal fire engines. It had a crew of four.

The Civil Aviation Authority required that fire crews should reach the site of an accident within 3min, and preferably within 2min. BAA believed that Spearhead would arrive on the scene 60 sec ahead of its existing Nubian Major-tenders when the latter has a 3 min run. The Spearhead was exported to a variety of overseas airfield operators, as well as the fifteen supplied to the British Airports Authority. Production was undertaken at Chubb’s factory at Feltham, Middlesex. It was powered by a rear mounted 7.2-litre Chrysler H440 V8 petrol engine developed 225 bhp, giving the Spearhead a top speed of over 70 mph and 0-50 mph in 21seconds. 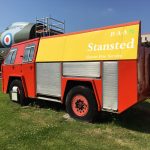