The Bedford TK Mobile Control Tower (81 AE69) was manufactured by Bedford Vehicles at their Dunstable plant and based on their TK truck chassis. A number of vehicles of this design were produced specifically for the UK Ministry of Aviation and Armed Forces during the period 1960-1990. They were used by Air Traffic Control at UK civil airfields and at military airfields in the UK and abroad. This particular vehicle was built in 1980, served at RAF Manston until 1995 then sold and used at Bournemouth Airport for a while. It eventually arrived at the Bournemouth Aviation Museum in 2009 and we have maintained it ever since, although spare parts are now difficult to obtain. The vehicle only has 10,000 miles on the clock, not bad for a vehicle built in 1980! It has been positioned so as to give visitors excellent views of the airport’s runway — just as in its service life.

The Bedford TK truck was launched in 1959 to replace the Bedford S type. It was produced in large numbers (500,000+) in a variety of derivatives including fire engines, military vehicles, horse-boxes, tippers, flat-bed trucks and other specialist utility vehicles. The Bedford MK/MJ (a 4×4 variant of the TK) was used in large numbers by the British Armed Forces and other overseas military services. It was also produced under licence in New Zealand and Argentina. The Bedford TK range was replaced in 1982 by the TL range which was notable for the introduction of a tilting cab, making servicing on the engine much easier. By the mid-80s sales of Bedford trucks had deteriorated significantly due to the lack of investment and strong competition from other manufacturers with more modern trucks. In 1986 Bedford announced they would stop production of all commercial vehicles and the Dunstable plant was sold in 1987 to AWD. They continued TK production for military use only until 1992, when AWD went into receivership.

The Mobile Control Tower was commonly referred to as the “Runway Caravan” and was situated close to the threshold of the landing runway. To make them more visible they were frequently painted orange and white. At large airfields, the main Control Tower was often some distance from the runway and had a poor view of the landing zone. This was solved by having a mobile “Runway Caravan” close to the threshold of the runway in use. It was staffed by a Controller / Assistant whose job was to observe aircraft landing or taking off and report any problems to the Control Tower; e.g. aircraft with landing gear not fully down. If necessary they could fire a red “Very pistol” or flash a red ALDIS lamp to warn the aircraft not to land. In the event of an aircraft radio failure, they could fire a green cartridge or flash a green light to inform the pilot they were cleared to land. You will see the two cartridge firing “shutes” in the roof of this van.

Eventually, the “Caravans” were replaced during the 1990s by CCTV cameras with remote monitoring from the tower and the era of these colourful vehicles came to an end. However, some are still in use at small airfields and gliding centres around the UK and preserved at aviation museums like Bournemouth and Brooklands (who have 81 AE 74). 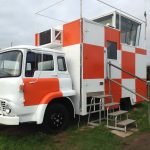 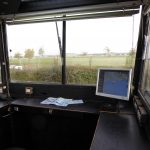