English Electric Lightning F.53 (cn 95281) ZF582 was one of a batch of thirty-four built for the Royal Saudi Air Force and delivered in September 1968 to Riyadh as 53-676. In 1980 it was renumbered 207 and remained in service until 1985. As part of a deal whereby the RSAF purchased newly manufactured Tornadoes, the remaining Lightning fleet was purchased by British Aerospace in January 1986 for possible resale and allocated a British military serial ZF582. However, no purchasers were found and the aircraft were disposed of by BAe. Fortunately, the cockpit section was saved and despite being moved around the country with various owners over the years, it’s final journey was to the Bournemouth Aviation Museum in September 2004.

The Lightning was a superb British built supersonic interceptor fighter, loved by its pilots but hated by its engineers. Design work of a radical new fighter design commenced in 1947, leading to a number of experimental aircraft before the final design. As well as highly swept back wings, the design was unusual in that the two jet engines were mounted above each other in the fuselage. The English Electric P1 had the basic shape of the final aircraft, flying in August 1954. It went supersonic on its third flight. The P1B first flew on 4 April 1957 and was followed by an initial RAF order for fifty aircraft in October 1958, when it officially received the name Lightning. Two 30mm Aden guns were fitted in the forward fuselage supplemented by two Firestreak guided missiles. These were needed for the fighter’s main task of intercepting Russian bombers and fighters over the North Sea at heights of up to 60,000 ft. The two Rolls-Royce Avon 210 engines developed massive power for the time (16,300 lb with reheat) which enabled the Lighting to climb vertically on take-off. However the engines were very thirsty and the early Lightnings had very limited flight endurance. In due course an under fuselage fuel tank was fitted.

Lightning F1’s entered service with 74 Squadron at Coltishall in June 1960, with four of them displaying at the Farnborough Air Show in September. 56 and 111 Squadrons at Wattisham received their aircraft shortly afterwards. The Lightning F2 entered service with 19 Squadron in 1962, this version mainly serving with RAF Germany, again providing defence against Russian fighters, The Lightning F3 introduced Red Top missiles, improved radar and later Avon engines. This version replaced the F1s for home defence. The final version for the RAF was the F6 which had a much larger under fuselage fuel tank to improve range. It entered service with 5 Squadron at Binbrook in December 1965, also serving at home with 56, 74 and 111 Squadrons. The RAF’s final Lightnings were withdrawn from service at Binbrook in August 1987, being replaced by Panavia Tornado F3.

A major success was the sale of forty Lightning aircraft to Saudi Arabia in December 1965 and remained in service until 1985. These were mainly F53’s plus some T55 trainers. The first RSAF aircraft flew in November 1966 and was later delivered direct under ‘Operation Magic Palm’. The RSAF aircraft are the only Lightnings to have been used in anger, attacking rebels in the south of the country. Ten Lightnings were also exported to Kuwait in 1968. 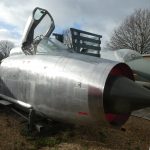 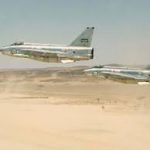