WS776 Gloster Meteor NF14 was built by Armstrong Whitworth at Coventry and delivered to the RAF on 22 February 1954, serving with 25 Squadron at West Mailing. It transferred to 85 Squadron in July 1958, then to 72 Squadron at Church Fenton in November 1958 and finally to 228 Operational Conversion Unit (OCU) at RAF Leeming in July 1960 before being withdrawn from active service in January 1961 and transported to North Luffenham where  it was displayed by the main gate. Disposed of by the RAF in March 1998 it moved to Sandtoft in November 1999, again being displayed by the main gate. It was then purchased by the Bournemouth Aviation Museum on
5th February 2005, carrying its original 25 Squadron markings.

The Gloster Meteor was the first jet to enter service with the RAF. First flight of this revolutionary fighter was on 5 March 1942. The Meteor F1 entered service with 616 Squadron at Manston in July 1944. Their task was to shoot down V1 flying bombs as they crossed the English Channel, although these early F1s had a very limited range and were soon replaced by the F4. The type soon became known as the `Meatbox’ in RAF service. Following the end of the Second World War further Meteors were ordered for the RAF, with the much improved F8 entering service in August 1949.

These fighter versions were armed with four 20 mm cannons in their nose, with the F8 capable of 550 mph at 30,000ft Meteors were ordered by many overseas air forces — including Argentina, Australia, Belgium, Brazil, Denmark, Holland, Egypt and Israel. The RAF had an urgent need for a night fighter to replace its wartime Mosquitoes and so development of the two-seat NF11 Meteor was undertaken by Armstrong Whitworth, with the prototype flying in May 1950. This was equipped with Al radar in its nose, with the four cannons moved to its wings.

The NF11 entered RAF service in spring of 1954, being followed by improved versions. The last of these was the NF14 which entered service with 27 Squadron in February 1954, being replaced by the Gloster Javelin from January 1956. The NF14 could be distinguished by its clear view cockpit. Fighter Meteors were also operated by Belgium, Denmark and France. In all a total of 3.545 Meteors were built by Gloster and Armstrong Whitworth between 1942 and 1955 — 575 of which were night fighters. At the end of production just 163 NF14 variants had been manufactured and were the first aircraft to introduce cabin pressurisation. Meteors were also employed for a variety of other duties e.g. photo reconnaissance, trainer, target tug, engine test bed, flight refueling, pilotless drone to mention some. 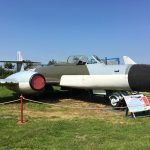