English Electric Canberra PR.7 (cn 71449) WT532 was built in 1955 and delivered to RAF Germany 80 Squadron. It also served with 17 Sqd in Germany, before being transferred to 13 Sqd in Malta in the late 1960’s. It returned to Germany again where it served with 13 Sqd at Laarbruch and then only a few months later transferred to 58 Sqd at RAF Wyton.

Initially retired from active service in 1981, it was then reprieved and flown to RAE Bedford in February 1982 for trials duties until February 1985. It then moved to 2 School Technical Training at Cosford in April 1986 for ground instruction duties, eventually being put up for sale in 1991 and purchased by Lovaux for spares recovery. It was moved to their site at Bournemouth Airport in April 1992 and when no longer of further use, passed to the Airport Fire Section in June 1994. However after little use the fuselage was donated to the Bournemouth Aviation Museum in July 1999 and the cockpit section restored for display.

The Canberra was a very successful British bomber originally designed in the mid 1940’s.The prototype flew on 13 May 1949 and was ordered in large numbers by the RAF where its two main roles were as a high altitude light bomber and a photo reconnaissance platform. The bomber could carry 6,000lb of bombs in its bomb bay and entered service with 101 Squadron at Binbrook in May 1951. The PR version could carry a variety of high definition cameras in a special compartment in the front of the bomb bay area, entering service with 540 Squadron at Benson in December 1952. By then hundreds of Canberras were on order and they served with over forty RAF squadrons during the 1950’s. As English Electric were unable to produce all the Canberras on order, arrangements were made for production also to be undertaken by Avro, Handley Page and Short Bros. English Electric were delighted when the Canberra was ordered by the USAF as the Americans had no similar ‘home grown’ bomber. The first of many orders was placed in March 1951 with the aircraft being produced by Martin Aircraft at Maryland. Australia also built the Canberra, although in smaller numbers. The USAF and Australian aircraft saw action in the Vietnam War.

As well as serving at home, RAF Canberras were based in Germany, the Middle East and Far East. Here they saw action during the Malaysian Emergency of the 1950’s. Back home improvements were made leading to the B(I)8 low level interdictor bomber version and the PR.9 capable of reaching over 60,000ft. The early bomber versions were taken out of service by the early 1970’s, but the B(I)8 continued in used by RAF Germany for a few more years. The PR.9 remained in service until July 2006, having seen active service over Iraq and Afghanistan. This means the Canberra served the RAF for fifty five years.

In addition to Australia, Canberras served with a number of ‘Commonwealth’ countries such as India, Rhodesia, South Africa and New Zealand. It was also operated by a large number of overseas air forces ranging from Argentina to Sweden, including Chile, Ethiopia and Venezuela. It fell to India to operate the last Canberras, the final one in May 2007. In later years Canberras served in a variety of second line roles, including Electronic Counter Measures (ECM) trainers, target tugs, unmanned drones, engine test beds and ejector seat trials. Throughout its service life the Canberra set multiple flight records including London-New Zealand Air Race in 1953, a world speed record and also completed the first British jet flight over the North Pole in 1954. 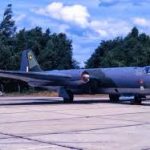