De Havilland Vampire T11 (cn 15596) XE856 was built by de Havilland Aircraft at Hatfield and entered RAF service in December 1954. It initially served with 226 Operational Conversion Unit at Stradishall training would-be fighter pilots. Transferred to North Weald in 1955 it was used by the Station Flight and also by 219 Squadron at Driffield. XE856 was then placed into storage at St Athan for a number of years before being purchased by Hawker Siddeley Aviation in October 1967 for possible sales overseas. However, this did not happen and the airframe was sold for preservation spending a number of years at various locations.

In June 1998 it moved from Yorkshire to Henlow where Dawn to Dusk Aviation intended to restore it to flying condition, placing it on the civil register as G-DUSK in February 1999. However, little work was undertaken and by 2005 the aircraft was moved to Jet Heritage at Bournemouth. It was subsequently sold to Bournemouth Aviation Museum in 2008 and restored to the colours of 219 Squadron.

The original de Havilland Vampire fighter was the second jet to enter service with the RAF, after the Meteor. The design featured twin booms carrying the tailplane, so enabling the full thrust of the low powered Goblin jet to be available. The prototype first flew on 29 September 1943 and the F1 version entered service with 247 Sqd in March 1946. The pilot had a good view forward from his high mounted cockpit and four Hispano-Suiza cannons were mounted under the nose. As part of its trials the Vampire became the first jet to land on an aircraft carrier in December 1945. More powerful engines led to the F3 and then a new role as a low level fighter bomber — the FB5 and FB9. These versions carried underwing bombs or rockets.

The Vampire was well liked by its pilots and it served with a large number of RAF squadrons. It proved successful in the export market, with air forces ranging from Sweden to Venezuela, Italy to India operating it. Overseas production was also undertaken by Australia and Switzerland. The Vampire was replaced by the de Havilland Venom in its fighter role, but a number remained in use for training. In 1950 de Havilland built the twin seat Vampire Trainer at their Christchurch factory. After trials the RAF placed large orders for the Vampire T11 as their new advance trainer. Production was undertaken at Christchurch and first deliveries made to 202 and 208 Advance Flying Schools in 1953. They were also used by the Royal Navy and large numbers were sold overseas — Sweden to New Zealand, Ireland to Indonesia. The Vampire T11 was replaced in RAF service by the Gnat T1 from 1962, although some remained until November 1967. In all a total of 804 Vampires were produced. 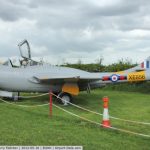