G-BRNM moved to the Bournemouth Aviation Museum’s hangar in March 2003 to continue trials. It was planned to re-engine the Leopard with FJX-2 engines but this never happened. The project dragged on for a while until the decision was taken early in 2005 to give up further development. In February 2005 G-BKRL joined her sister aircraft G-BRNM on display at the Bournemouth Aviation Museum following the termination of testing. In 2008 the Museum had to relocate from the hangar on the airport to the current BAM site. Fortunately G-BKRL was one of the aircraft that came with us to our new site, whilst G-BRNM was moved up to the Midland Air Museum at Coventry.

The Chichester-Miles Consultants Leopard (cn 001) G-BKRL was one of two prototype aircraft, the other being G-BRNM. The Leopard was ahead of its time and led the way for the present day series of Very Light Jets. Designed by Ian Chichester-Miles in the early 1980’s, it was to be a high performance four seat business jet powered by two Noel Penny NPT301 turbojet engines. G-BKRL was displayed statically at Farnborough Air Show in September 1986, although it did not fly until 12 December 1988 from RAE Bedford. However, test flying from Cranfield revealed the aircraft to be underpowered and this was not helped when Noel Penny went out of business in October 1991.

A second aircraft was built, but this time powered by two 700 lb thrust Williams International FJX-1 engines. The airframe was strengthened, incorporating a pressurised cabin and an improved undercarriage. G-BRNM was displayed at Farnborough in September 1996, but its first flight was not until 9 April 1997. As part of its sales campaign it was taken to America in July 1999 for display at the EAA Oshkosh Show. Chichester-Miles had a small workshop at Old Sarum, but the Leopard was unable to fly from the airfields grass surface, so further trials were undertaken from Bournemouth in the late 1990’s, with the aircraft initially based with FRA.

The Leopard was intended to cruise at M.76 at a height of 45,000 ft. At this height it was above the majority of airliners, whose captains would query a fighter like aircraft climbing past them to great height whilst on test flights. The first Leopard was powered by two Noel Penny Turbines turboiet engines; each one could output 330 1bs of thrust. 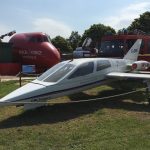