The British Aircraft Corp Jet Provost T5A (cn EEPMP/974) XW310/G-BWGS was built by BAC at Warton in spring of 1970 (The wings were built here at Bournemouth). Delivered to the RAF in May 1970 to No 1 Flying Training School (FTS) at Linton-on-Ouse. Early in 1973 XW310 was repainted in a special colour scheme for use by No 1 FTS’s display team — ‘The Blades’. In March 1975 it returned to Warton for modification to a T5A after which it was stored at 5 MU Kemble for four years. In June 1979 it was delivered to Cranwell for use by the RAF College, where it continued until September 1988 when it flew to 27 MU Shawbury for storage.

Struck off RAF charge in 1993 it was eventually sold in February 1995 to Everett Aero at Ipswich. It was placed on the civil register as G-BWGS in August 1995 but remained in store. One year later it was moved to North Weald and restored to airworthy condition by McCarthy Aviation and repainted in its ‘Blades’ colour scheme. It then flew with various owners, ending up with ‘Where Eagles Share’. Out of service by 2008, G-BWGS remained stored at North Weald, eventually acquired by the Bournemouth Aviation Museum in September 2017 for restoration to display standard.

Developed by Hunting Aircraft at Luton from its piston Provost trainer of the late 1940s, the Jet Provost was built in response to a 1953 RAF requirement for a jet powered primary trainer designed to provide pupils with all through’ jet training. A fairly simple re-design led to the use of an Armstrong Siddeley Viper jet engine of 1,750 lb thrust, and the fitting of a nose wheel undercarriage. The first of ten Jet Provost T1s flew in the summer of 1954 and the type was used for trials by No. 2 FTS from the summer of 1955 alongside the existing piston Provost. The trials proved that trainee pilots showed no great problems in receiving their initial training on a jet aircraft as opposed to a piston powered one. A greater benefit was that pilots on the Jet Provost took less time to reach their solo flying stage than on the existing Provost.

Successful trials of the Jet Provost led to the RAF ordering large numbers of the developed T3 version in 1957. This had a more powerful Viper engine, improved cockpit canopy, tip tanks for extra fuel, shortened undercarriage and Martin-Baker ejector seats. The first of 205 RAF Jet Provost T3s were delivered to No 2 FTS at Syerston in the summer of 1959, with the first all jet “ab-initio” course being completed the following June. Later the T3 was developed into the T4 which had an even more powerful Viper, giving it a greater rate of climb. 185 T4s were delivered to the RAF between November 1961 and the middle of 1964. Large numbers were also built for overseas air forces, including Ceylon, Iraq and Venezuela.

During the 1960s and 1970s most of the RAF’s Flight Training Schools (FTS) operated their own aerobatic teams for display at Air Shows, including “The Red Pelicans” from the Central Flying School. Successful service of the Jet Provost T4 led to a further development – the T5.
The need for a high altitude training and the fact that the T4 was not pressurised, resulted in BAC (who had acquired Hunting Aircraft) developing the T5. The prototype flew in February 1967 and entered service with the RAF Central Flying School at Little Rissington in September 1969. 110 were built by BAC at Warton for the RAF and Jet Provosts remained in RAF service until May 1993 when they were replaced by the Short Tucanos.

BAC developed an armed version of the Jet Provost T5, known as the Strikemaster. It was fitted with underwings guns or rockets plus a more powerful engine. First flown in 1967, it was widely exported. On retirement from RAF service many jet Provosts were bought by private owners. It provided them with a relatively inexpensive jet ‘Warbird “. Many others found their way to museums. 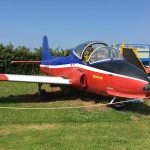