BAe 125 Ss.700 (cn 257181) ZD620 was built by British Aerospace at Chester in 1982 and first flown on 18 November. It was delivered to the RAF at Northolt on 24 February 1983, where it served with 32 Squadron. It joined four other earlier 125s already with the Squadron for the transport of Government Officials and Military Top Brass. During 1988 ZD620 was repainted dull grey in order to make it less conspicuous and all the RAF aircraft were fitted with electronic defensive aids to give 360° protection against infrared missiles. On 1 April 1995 32 Sqd and The Queen’s Flight merged to form 32 (The Royal) Squadron, following which ZD620 was repainted into VIP colours again. The RAF’s final three 125s were taken out of service on 31 March 2015. However, due to their age and amount of military modifications, they were not able to continue flying. After its sale ZD620 flew to Dunsfold on 25 March for parting out by Hayward & Green Defence Ltd. However they kindly agreed for the fuselage to be moved to the Museum for display, where it arrived on 29 October 2015. Its total airframe time was 14,000hrs.

The BAe 125 was Britain’s bestselling corporate aircraft, being a world leader in its class and outperforming many American competitors. Originally developed by the de Havilland Aircraft Company the prototype DH125 flew in August 1962 and soon proved to be a winner. De Havilland became part of the Hawker Siddeley Group in 1964 and first deliveries of the now HS125 to customers were made in September 1964. Sales were made all over the world, including the all-important North American market. A specialised navigation trainer version was produced for the RAF, known as the Dominie T1 which entered service in 1965. Over the years the 125 has grown in size and in 1976 the engines were switched from the original noisy Bristol Siddeley Viper jet to the Honeywell TFE731 turbofan. The original version carried six executive passengers and this was increased to seven with the series 400 introduced in the summer of 1968.

The series 600, introduced in 1971, could carry up to fourteen passengers at a pinch, with eight being more normal. A major development in 1976 saw the series 700 which introduced the turbofan engines which enabled the 125 to be more saleable in an anti-noise environment. In 1977 Hawker Siddeley became part of British Aerospace, with future versions produced as the BAe125. Under British Aerospace sales to North America continued, leading to the series 800 from 1983. This had greater capacity and range, proving the best-selling version. The final development was the series 1000 which flew in the summer of 1990, being a longer range version of the 800 carrying fifteen passengers in a lengthened fuselage. This version had extended range and was powered by Pratt and Whitney 305 turbofans.

In 1993, production rights for the aircraft were sold to the Raytheon Corp of North America, who owned Beech Aircraft, the producer of a large number of executive turboprop aircraft. The final assembly of the 125 moved to Raytheon’s factory in Kansas with major assemblies continuing to be produced at Chester. They were now marketed as the Hawker 800 and Hawker 1000. In March 2007 the company changed its name to Hawker Beechcraft Corp covering the range of executive jets and turboprops. The company hit financial problems which resulted in production of the 125 ending in the summer of 2012 with the company declared bankrupt in February 2013. So ended production of the 125 after fifty years – not bad for a British industry design which saw over 1,600 aircraft produced with 60% of them for the North American market — the home of the corporate jet. 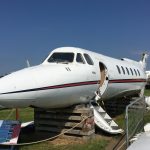 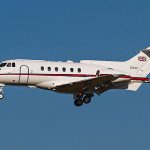