XL164 Handley Page Victor K2 (cn HP 80/67) was built by Handley Page as a Victor B2, flown from Radlett in May 1961 and displayed at the Farnborough Air Show in September. It was retained by Handley Page for autopilot trials, also spending time at A&AEE Boscombe Down 1963/64.

Although modified to carry a Blue Steel nuclear bomb, XL164 never served the RAF as a bomber. After a period of storage it was selected at the end of 1972 to be one of a number of B2s converted into tankers. Modification work was carried out by Hawker Siddeley at Woodford, with XL164 emerging as a Victor K2. It initially served with 57 Squadron at Marham 1977-79, then with sister 55 Squadron in 1981, back to 57 in 1985 before returning to 55 in 1986. 55 Squadron was the last one to operate the Victors, XL164 being withdrawn in September 1993, with the squadron disbanded the following month.

XL164 was flown to Brize Norton in November for use as an instructional airframe (9215M), still in its Gulf War colour scheme. It was scrapped in August 1995 with the nose saved by the Gatwick Aviation Museum. When their collection was reduced in size, the nose was moved to The Bournemouth Aviation Museum in May 2013. It still carries its Saucy Sal nose art from its Gulf War years. It has recently been moved to a more appropriate position close to the Vulcan and placed on a specially built trestle. Unfortunately, the nose section is not curently in great condition but we hope to renovate it in the near future and give a new coat of paint more fitting for this fantastic V Bomber.

The Victor was one of the famous three V-bombers that entered service with the RAF in the 1950’s. It was designed to carry a bomb toad of 35,000 lb at high speed and great height for long distances. Design work started in the late 1940’s and the new bomber was fitted with, a crescent shaped wing which was based on German WW2 research. The prototype flew on 24 December 1952 by which time the RAF had placed its first order for twenty-five. The Victor B1 entered service with 232 Operational Conversion in November 1957, followed by 10 Squadron at Cottesmore in April 1958.

The early Victors also served with 15, 55 and 57 Squadrons and undertook a number of long range overseas deployments. During 1964 they operated from Singapore and Malaysia during the Indonesian troubles, but did not see action. The last of the Victor B2 order was completed as the prototype B2 with more powerful engines and greater wing span, first flying on 20 February 1959. The new version entered service with 100 and 139 Squadrons at Wittering and was capable of carrying an Avro Blue Steel stand-off missile instead of its normal load of 35 1,000 lb bombs.

When the Royal Navy took over Britain’s nuclear defence role in 1964, the RAF’s Victors were switched to a new low level bombing role. At this time the bombers lost their overall white paint scheme to be replaced by grey-green camouflage. Victor B1s were withdrawn from their bombing role in 1966 and B2’s by the end of 1968. However a number of B/SR2’s remained in service with 543 Squadron at Wyton until May 1974. This version, equipped with additional fuel tanks, served as the RAF’s strategic reconnaissance aircraft.

A new role was found for the surplus Victor B1’s — that of a long range tanker. Thirty were converted by Hawker Siddeley at Woodford, entering service with 55 Squadron in June 1965. When the B2s were withdrawn, twenty-four were converted into tankers — the Victor K2. It was this version that finally went to war during the Falklands War of 1982. They were vital in refuelling RAF aircraft between the UK and Ascension Island and then famously enabling Vulcans to fly the 4,000 miles south to bomb Port Stanley. To get one Vulcan to Stanley took eleven Victor tankers, with some of their missions lasting fifteen hours. Victor K2’s were also in action during Gulf War 1 in 1991, but were withdrawn from service in October 1993, being replaced by VC.10s and Tristar tankers.

Victor retirement finally came in October 1993 when the last Victor squadron 55 Squadron, disbanded at RAF Marham. Most Victors ended up in use as firefighter training aids or were scrapped, only a few being preserved. Of the 86 Victors produced (including the two prototypes), only 5 full examples now survive.

Two remaining survivors are still in such a condition that they are both capable of fast taxi runs, and this led to an inadvertent flight by the Bruntingthorpe example, which took to the air briefly in May 2009 – and thus became the last Victor ever to take flight. 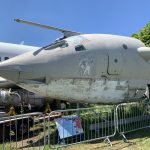 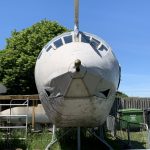