Boeing 737-229(A) (cn 21135) G-CEAH was originally is one of fifteen Boeing 737-200 series aircraft ordered by Belgian airline Sabena. It first flew in May 1975 and then delivered to Sabena in June registered as OO-SDG. It entered service on the airline’s routes across Europe, which expanded over time, leading to further 737’s being ordered. Sabena decided to supplement its 200 series aircraft with a mix of 300/400/500 series aircraft which were ordered in 1988. Sabena later switched to a fleet of Airbus A320’s which entered service in the mid 1990’s. The remaining fleet of thirteen 737-200 aircraft were sold to European Aviation of Bournemouth in May 1998. However, along with some of the other aircraft, OO-SDG continued in use with Sabena for a while longer and was finally taken out of service in January 2000. It was eventually delivered to European Aviation in October 2000.

OO-SDG was re-registered as G-CEAH and was overhauled for use by European Aviation Air Charter. Along with their other Boeings, G-CEAH replaced European’s ageing fleet of BAC One-Elevens which no longer met worldwide noise regulations. G-CEAH operated charters around Europe (frequently out of Manchester) for a variety of other airlines including Palmair, Jet2 & BMI Baby.

G-CEAH was one of four 737’s still flying with European Aviation when the company went into administration at the end of November 2008. Along with the majority of their fleet it was stored at Bournemouth, but did not find a new buyer. After slowly deteriorating, it was broken up at the end of March 2013 but the main fuselage section was saved and moved to the Museum in December 2013. It was then restored by the volunteers, repainted in the colours of Palmair and named “The Spirit of Peter Bath” as a tribute to the Chairman of the company. The aircraft now contains an exhibition telling the history of Palmair which for a number of years operated out of Bournemouth and frequently picked up Best Airline Awards.

The Boeing 737 is a narrow-body aircraft produced by Boeing at its Renton Factory in Seattle. It was originally developed to supplement the B727 on short and thin routes. The initial 737-100 made its first flight in April 1967 and entered service in February 1968 with Lufthansa. The lengthened 737-200 entered service in April 1968. It has now evolved through four generations:

As of December 2019, 15,156 Boeing 737s have been ordered and 10,571 delivered. Actual backlog stands at 4,398. Initially, its main competitor was the McDonnell Douglas DC-9, followed by its MD-80/MD-90 derivatives. It remained the highest-selling commercial jetliner until surpassed in total orders by the Airbus A320 family in October 2019. The current 737 MAX, designed to compete with the A320neo was grounded worldwide in March 2019 following two fatal crashes. 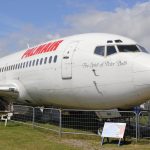 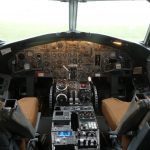 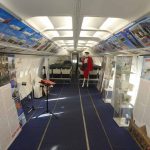