Restoration of the Vampire continues

The De Havilland Vampire has been at the museum since we moved to the current site in 2007. Unfortunately, the years have taken its toll on the aircraft and the British weather has not been kind to it. The main fuselage body is mostly of wooden construction and in need of repair and some TLC. The good news is that the restoration project has finally begun!

Firstly, the Vampire had to be moved to a new position that would enable us to put the aircraft under cover once the work was completed. However, this was not a simple task as it required us to move both the Victor and Herald to new positions to create a space for the Vampire.  The Victor was moved closer to the Vulcan which required a large crane, a large trailer and several willing volunteers to help. This was done last summer and the Victor is now resting on a specially built trestle near the Vulcan. The Herald was also moved to a new position next to the Harvard.

The Vampire was then moved and placed under a temporary cover so the work could begin! Two of the volunteers Paul Nesbitt and Alan Roughton have been working hard over the past few months on stripping down the main fuselage and repairing any rotten wood. Once this has been completed and sealed then the rest of the aircraft will be stripped down ready for a repaint. Paul and Alan have made a fantastic start to the project as you can see from the photos, but given the size of the aircraft this is no easy task and will take many months to complete.

This is a great example of the work undertaken by the volunteers at the Museum in trying to keep our collection of aircraft in the best condition possible. Many are just keen DIY enthusiasts who may not have tried these types of projects before but nevertheless want to help in any way they can. So if you want to join our happy and enthusiastic band of volunteers to lend a hand then please call into the Museum and ask about becoming a Volunteer or complete the Application Form on the website.

Latest update: 2nd February 2022
The Vampire has now been sand blasted and all the old paint removed. New primer coats has been applied and we are just waiting for some warmer weather before we can start painting the top coats. In the meantime, work has now started on the new roof structure which will ensure the Vampire finally has a roof over it’s head! 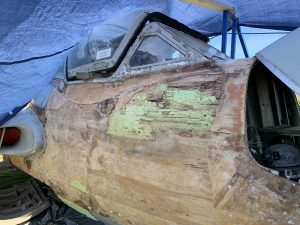 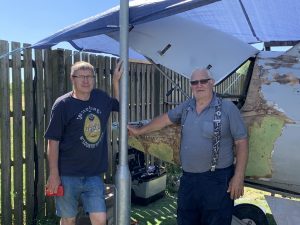 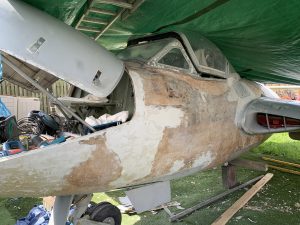 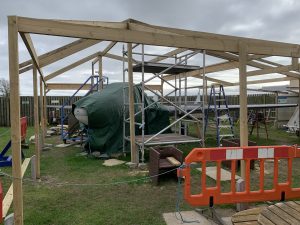 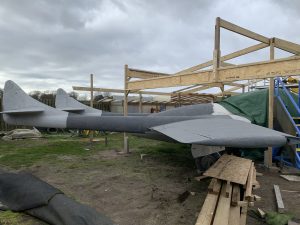