The restoration of the Hawker Hunter XG160 has now been completed following 18months of hard work by two of the Museum volunteers Jim Dunsmore and Alan Young. This has been a huge undertaking and it’s a great achievement to have finally completed the restoration despite the difficulties of COVID lockdowns. The unveiling of the “new” Hunter finally took place at the end of September.

XG160 served with 111 Squadron from 1958 for several years and was part of the RAF Display Team called the Black Arrows. They famously displayed at the 1958 Farnborough Airshow with 22 Hunters in formation performing a loop, which is a world record that still stands to-day. So it was absolutely appropriate to restore the aircraft in the colours of the Black Arrows.

The aircraft was initially shot blasted by the team from Southern Dustless Blasting to remove the old paint. Then Jim and Alan washed the aircraft down and completed the body repairs. After that it was on with the primer coats and then two coats of black and finally a coat of protective polish. A superb new set of decals were made and fitted by Jon Porter from Microaces and it was ready!

The President of Bournemouth Aviation Museum is Chris Christie who is a retired RAF Group Captain but used to fly Hunters early in his RAF career during the 50/60s. We thought it would be a nice touch to include his name on the aircraft to represent all the many pilots who have flown Hunters over the years (nearly 2000 aircraft were built). The Hunter is now available so visitors can actually sit in the pilot’s seat and imagine what was was like to fly the superb British fighter. 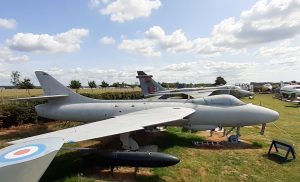 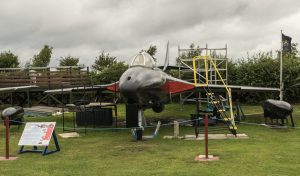 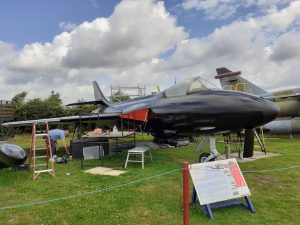 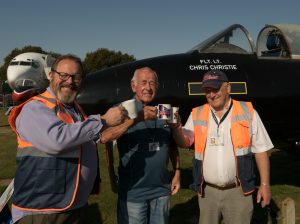 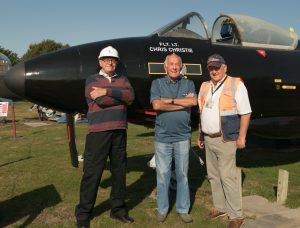 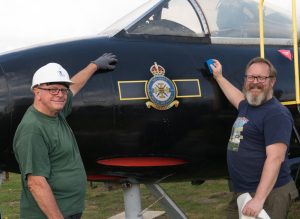 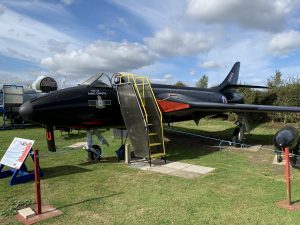